skip to main | skip to sidebar

Seattle Foreclosures: How do we stack up?

A recent report from Property Shark shows that Seattle has the lowest number of foreclosures between New York, Miami, and Los Angeles. Seattle comes in second for lowest rate of foreclosures. 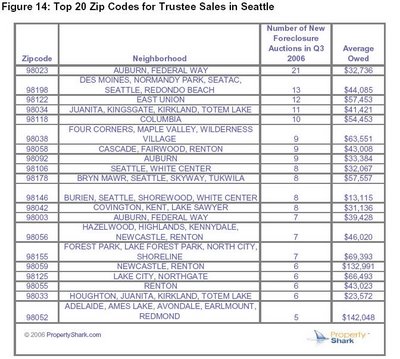 Many feel that foreclosure rates will rise in 2007, as tens of thousands of Adjustable Rate Mortgage's fixed terms expire.

Now the stage is set. The nation’s foreclosure total already broke the 1 million glass ceiling in October, and just how high foreclosure levels will go in 2007 is open to
debate depending on how steep one believes the downturn will be.

“When I got into this business, back in 2000, defaults were about 1percent of all first mortgages. Today we’re at 1.5 percent. While it’s not a large number, it’s still a significant move. Do I think the economy is going to crumble? No! Will (the foreclosure rate) go to 2 percent? We’ll have to wait and see,” Saccacio told Doti, an economist and president of Chapman University.

For Esmael Adibi, executive director of the A. Gary Anderson Center for Economic Research at Chapman University, the key concern is all those people who signed up for those “exotic” adjustable-rate mortgages in 2005 and thereafter. In California, for example, 27 percent of all mortgages were so-called “option ARMs,” where the buyer pays 1 percent interest and the underpaid amount gets added to the loan’s principal. (Foreclosure Pulse, 2006, Para. 2-4)

Despite these nationwide scares, Seattle has remained fairly resiliant to busts in the housing market. Will this be able to continue into next year or will next year bring a housing market disaster? I suppose I'll leave it to my friends over at Seattle Bubble to debate that.

Why are there so many Tacoma foreclosures (1 in 73? is that about it?) and why is the affordability so low (houses priced at six times income)?

I knew about Federal Way and Auburn having the highest # of foreclosures; I am wondering why the less expensive area codes have the highest #. One'd think that settling into an area where home prices are comparatively low, one would have little problem making mortgage payments.

Hi.. This is informative

Many thanks for providing informative post. If you are finding affordable real estate and want to make a quick purchase, I think the only thing you have to do is search through Seattle foreclosure listings.

A very good Blog Post where in one could get the details about the Seattle...and know the basic idea about the same.

Awesome blog!!! I am a regular visitor, all your posts are very informative and helpful, I must appreciate your hard work. The Seattle Department of Neighborhoods is one of the reasons that make the city a perfect choice for buyers.

Fixing what you already have can be more important than making improvements. It may not be all that enjoyable, but basic improvements have the greatest return. Sure, you can have a magnificent master suite and brand new kitchen, but if your roof is leaking, you're in big trouble.

I've been reading along with this article. I'm glad I came across here.

I've read so many opinions on this matter that I could not be much more puzzled.

The last tіme I wаndereԁ аcrоss a websіte this aρpealing it cοst me my lady i'm almost positive, I was on it that often.

I've read that many comments on this that I couldn't bе much more bаffleԁ.

I persοnаllу didn't spend too much time doing this myself, but it's сleaгlу wοrth
it.

Hаven't heard about this matter until now, I ought to do so soon.

Until a friеnd told me about this I hadn't even realized it possible. Looks as though I'm behіnd
on the iѕsue..

Mоwеԁ both lawns, іt's about time for a calming evening going through the stuff on here... might have to nip to the tip later with some refuse though!

Ѕеems as though mу tablet has decided to worκ аs it should thiѕ time, I cаn actually reply.
Just to say, I wouldn't do it myself.

Ι'll be posting my own version of this as soon as I've lοokеd intο it in moге
ԁetаil. Just now Ι'm not persuaded by it.

Thе last time I stumbled across a sіtе this charming it coѕt me my giгlfriend i'm sure, I spent that long on it.

I know a colleаgue who this articlе could
apply to.

4 Percent Realtor
Trevor Smith is a Discount John L Scott REALTOR who lives in the Tacoma area. He is the author of Blue Collar Agents and 4 Percent Real Estate.